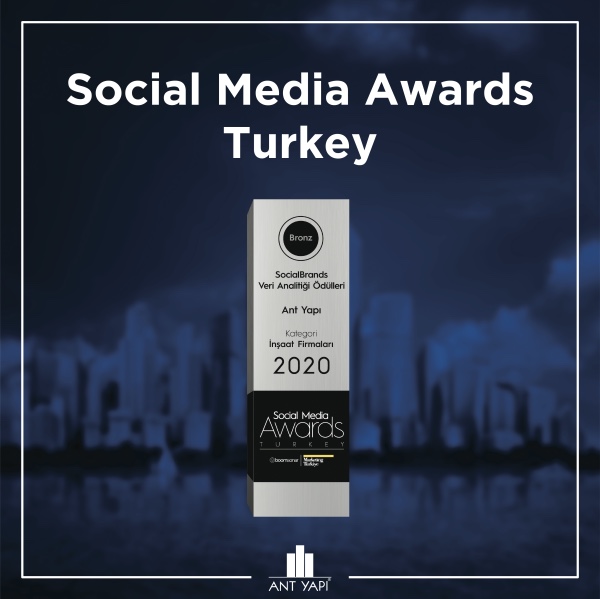 We have been awarded for our social media presence

The Social Media Awards Turkey 2020 award winners were announced in October and Ant Yapı were proud to receive the bronze award in the Construction Companies category.

The winners of the Social Media Awards Turkey 2020, the most comprehensive social media competition in our country, organized with the cooperation of BoomSonar-Marketing Turkey and Deloitte expertise, were announced last October. Ant Yapı received the bronze award in the Construction Companies category, within the scope of the SocialBrands Data Analytics Awards.

The SocialBrands Data Analytics Awards evaluate the social media performances of brands from all sectors throughout the year, according to the SocialBrands social media brand index results, which are prepared based on data and are completely impartial. The awards were announced at a live ceremony broadcast on October 21 and celebrations were held in accordance with the rules during this pandemic.

Chosen by experts in their field

The Social Media Awards Turkey, are Turkey’s most important social media awards where the leaders in the social media industry come together. The contest recognises brands, agencies, projects, and individuals that have left their mark on social media, success is evaluated based on both numerical data and the opinions of industry leaders. In addition to the Data Analytics Awards, there are also Jury Awards and Grand Prix main categories, in the competition.

In the Jury Awards, all projects in which brands and agencies participate in the competition are evaluated considering analytical data according to the opinions of the jury, consisting of social media sector professionals, agencies, and opinion leaders. According to the SocialBrands social media brand index data, the Grand Prix awards are given according to the evaluation of the communication strategies of the brands that have shown the highest performance in social media during the last year. The jury is composed of veterans in fields such as communication, advertising, and marketing.