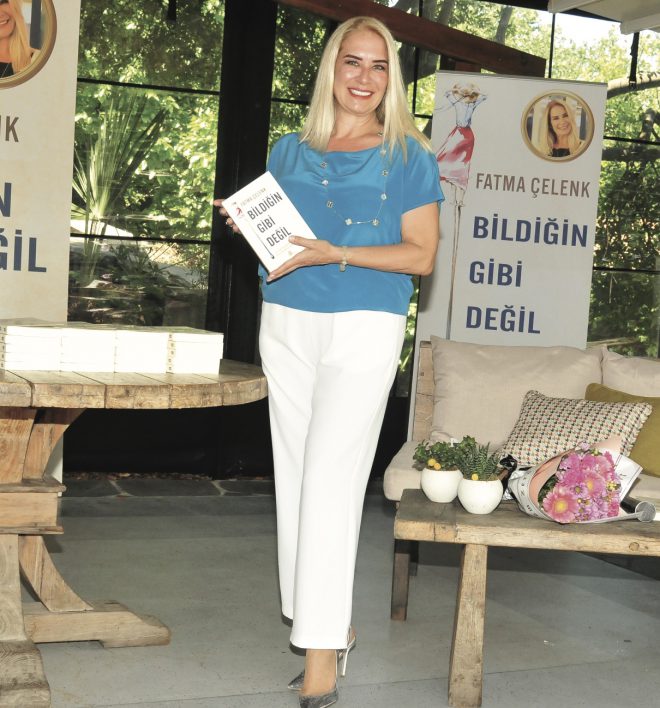 OUR GENERAL COORDINATOR FATMA ÇELENK’S FIRST BOOK IS OUT!

In her novel Bildiğin Gibi Değil (You Have No Idea), in which the past and the present are intertwined, Fatma Çelenk narrates the last 50 years of our country that’s been shaped by economic and political struggles in a simple and fluent language, while presenting the ordinary lives of her characters in everyday life.

General Coordinator of Ant Construction Fatma Çelenk introduced her first book, named Bildiğin Gibi Değil, at an event held in Momo Bebeköy. Çelenk has received many awards both in her country and abroad for the social responsibility projects she has designed for society. In her first novel, which was published by Mona Books, the author deals with love, life, and acceptance. Also, Çelenk, who narrates the last 50 years of Turkey that’s been shaped by economic and political struggles, with a simple and fluent language, lets the reader in on ordinary lives with coups and losses.

While Fatma Çelenk’s excitement for her first book didn’t go unnoticed at the event in Momo Bebeköy, she has drawn attention from a lot of names in the political, art and business worlds. Şişli Mayor Muammer Keskin, famous writers such as Soner Yalçın, Kürşat Başar, Nasuh Mahruki, Makbule Cengiz and well-known artists from the State Theater such as Feyha Çelenk, Yıldız Kültür, Serpil Tamur and Murat Karasu also attended the event. In addition, a lot of businesspeople from the real estate sector also attended the book signing event, which was also attended by Fatih Ürek, another famous name from the entertainment industry. A passage from the book was read by the artist Ali Düşenkalkar. As Ant Construction, we also supported the promotional event that was attended by the British Commercial Attaché, the New Zealand Country Directorate and Presidents of associations that represent the real estate sector.

WHO IS FATMA ÇELENK?

Fatma Çelenk, who is a Mimar Sinan Fine Arts University graduate, has drawn attention with her work in drama, cinema, radio-television and corporate communication fields throughout her career.

Along with her General Coordinator position at Ant Construction, her articles on business life are regularly published in many magazines and blogs, and she continues to give seminars at universities.

For a long time Çelenk took on the role of Vice Chairman of the Board of Directors of the Social Responsibility Association of Turkey and she remains on the Board of Directors of the Corporate Communicators Association. As the Head of the Women Leaders Platform in Real Estate, of which she’s one of the founding members, she continues to carry out projects to increase knowledge, skills and strengthen the level of management aimed at the needs and expectations of women in the field. We sincerely thank Fatma Çelenk for presenting her first novel named Bildiğin Gibi Değil to us.

WAS SHE RUNNING AWAY FROM FALLING IN LOVE OR FEAR OF LOSS?

The young journalist woman, who set out to write little-known stories behind successful companies, was unaware of what she’d go through when she entered the building for an interview and would be thrown into the middle of a heap of tangled lives. While witnessing the lives with fires, coups, and losses; she wasn’t even able to feel that uncertain webs of destiny were wrapping her up and shaping her life…