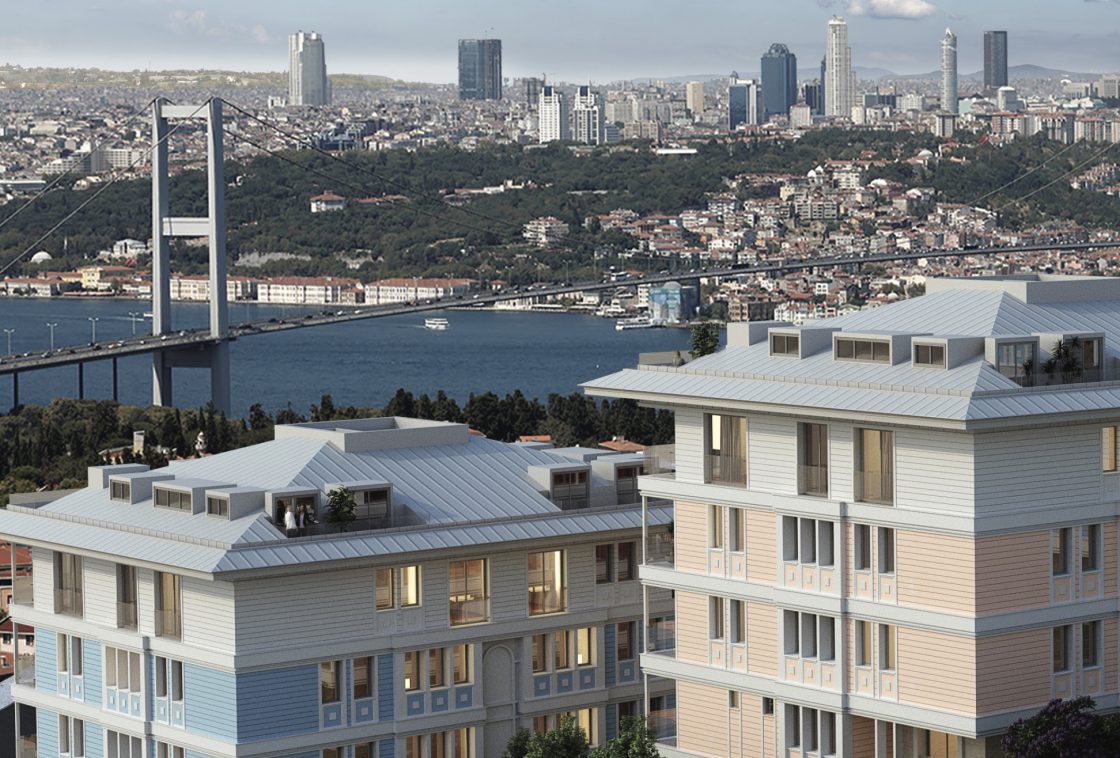 We are bringing another brand new and magnificent residential area to the gorgeous Bosphorus town on Istanbul’s Asian side, Beylerbeyi: Antteras Nev. Bearing traces of 18th century architecture, you can reserve your home now while our project is under construction.

Always a center of attraction and a popular destination both for Istanbul residents and for Turkish and foreign tourists visiting this district with its historical sites, activities, and convenience of transportation, Beylerbeyi is known as the Ortaköy of the Anatolia side. Used as the Sultans’ private garden area during the Ottoman Empire era, Beylerbeyi embodies a baroque style mosque, a waterside mansion used as a boutique hotel, and restaurants that are located around the ferry port and not forgetting the areas famous palace. 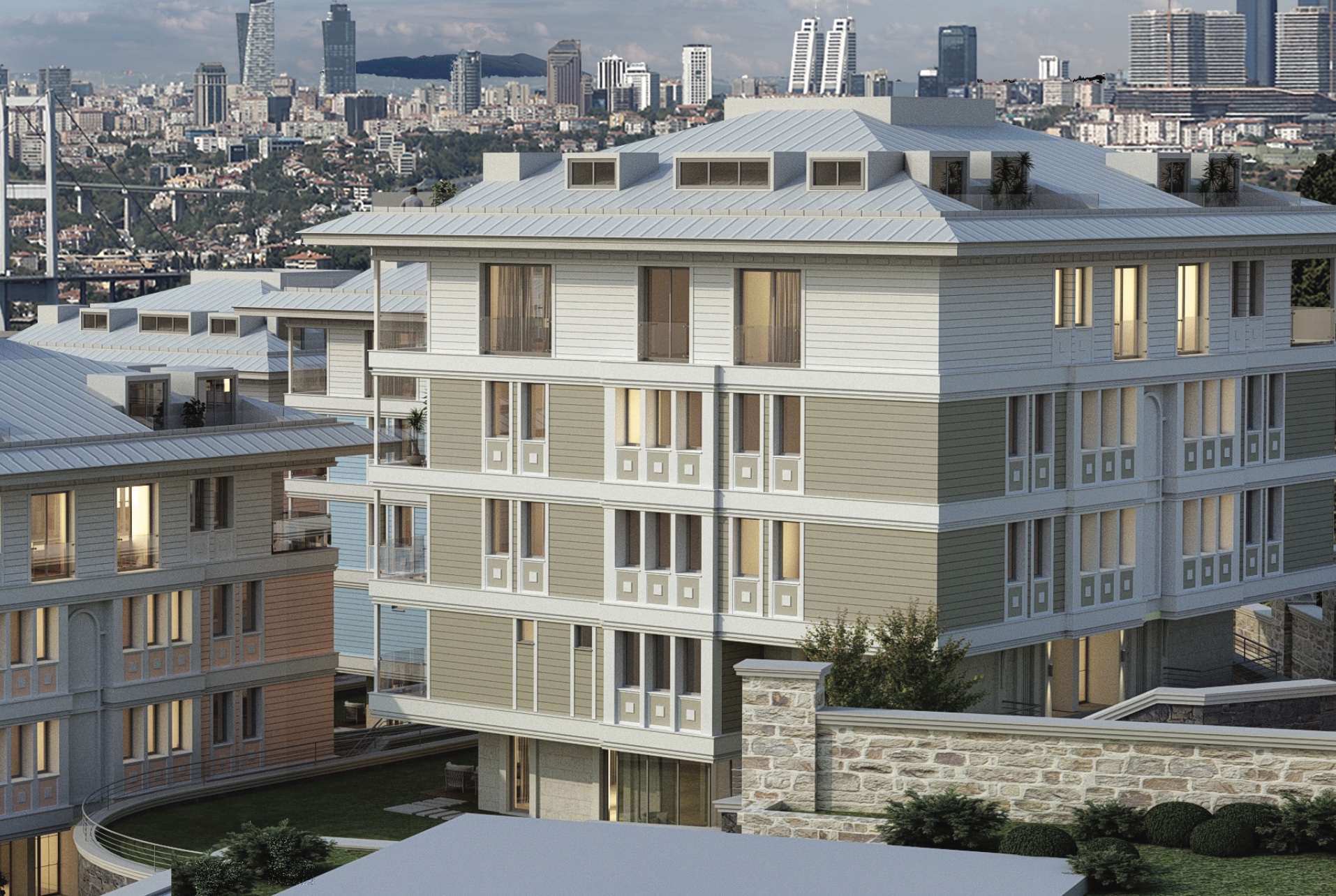 Our award-winning project that has become one with the historical atmosphere of the area is also in Beylerbeyi. Now we introduce a follow-up to our project Antteras, which is located in one of the most beautiful places in Istanbul and comes to life with an unmatched neighborhood concept, called  “Antteras Nev”. Antteras Nev was designed with the thinking that living in Beylerbeyi is pleasurable. Antteras Nev, which stands out with its position overlooking the sea, bares traces of 18th century architecture with its color, atmosphere and designs. 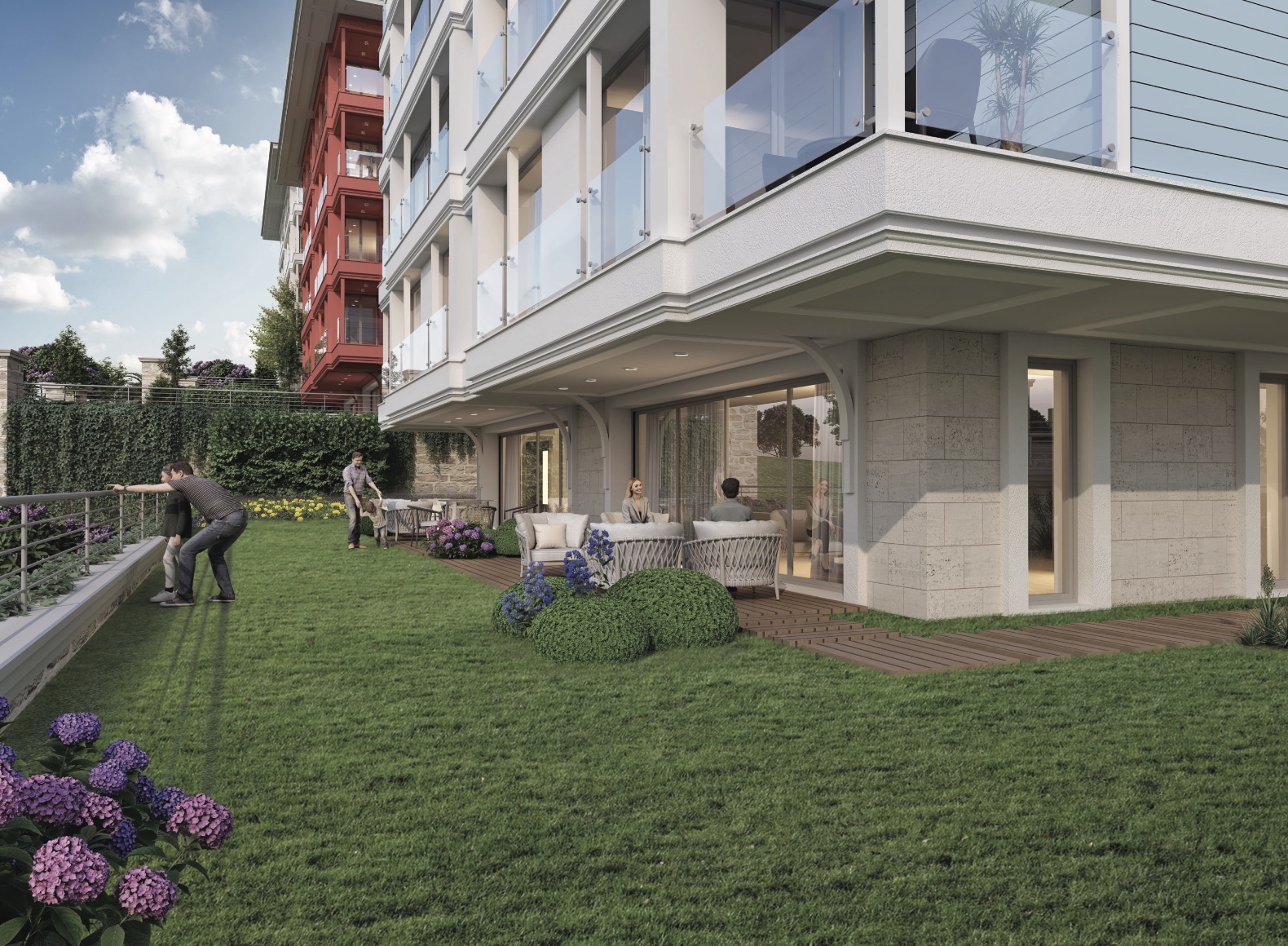 As Ant Construction, all of our projects focus on “people” and our aim is to determine our buyers’ needs correctly and meet their needs in the right way. That’s why Antteras Nev project, which is made with the finest details in the art of architecture, has the ability to become a living space that can meet all the needs of a family. All of the supplies used in our project and the manufacturing were produced according to the Ministry of Environment, Urbanization and Climate Change specifications and TSE norms. 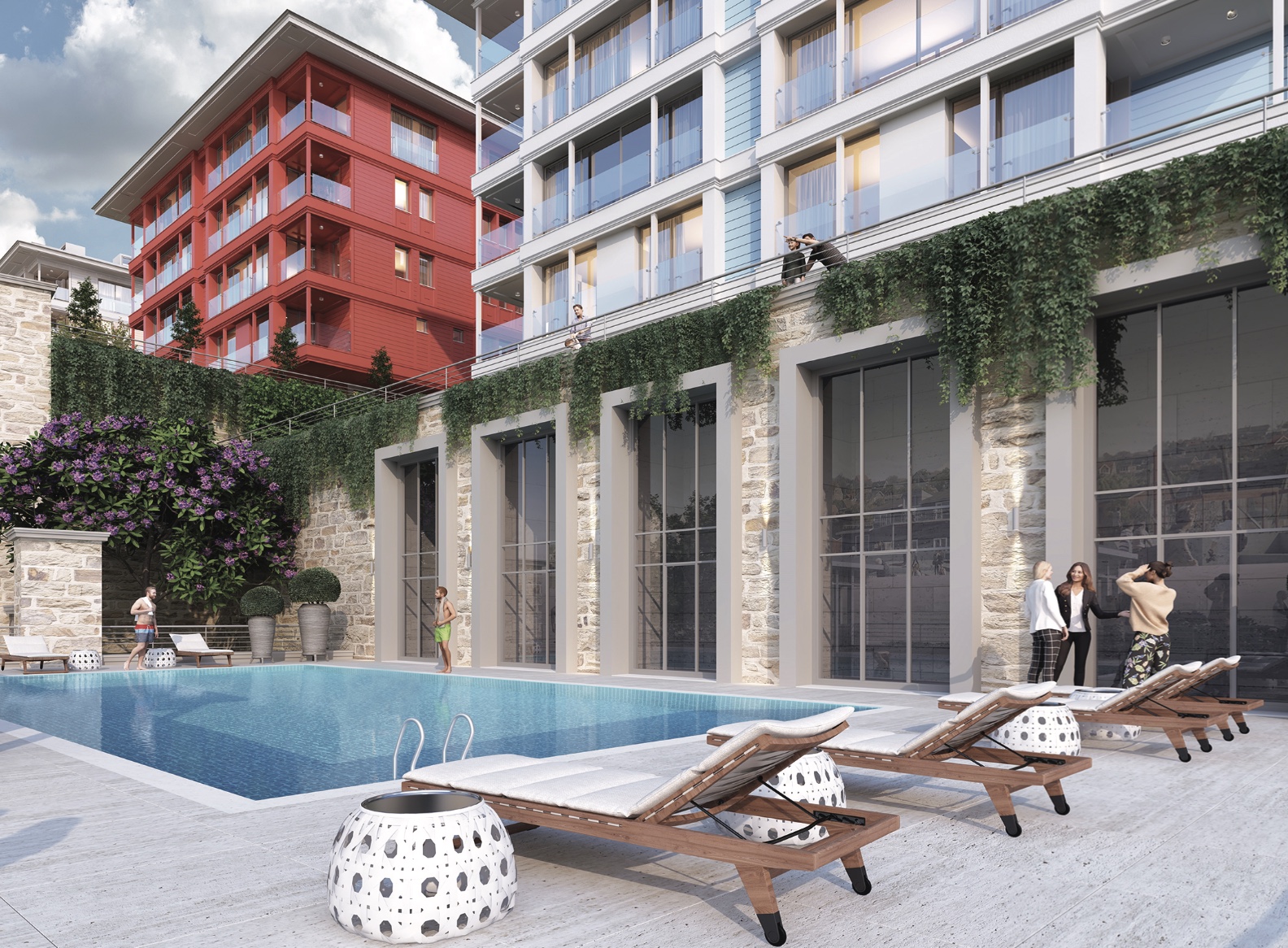 The follow-up to Antteras, our project Antteras Nev’s properties of its community areas as well as its interior design are as listed below:

Common Spaces of the Complex: Indoor social facility, pool, barbeque space, playground and playgroups, courtyard, landscape with plenty of trees and grass areas, rainwater collection system for watering the common areas due of the limitation in water supply, water tank and water booster system to meet the needs of the residents for a limited duration, security and service units.

Parking lots: Two parking garage spaces for each of the apartments, according to the project and connected to the elevator halls in the buildings.

Storage rooms: One storage room, varying depending on the project and type of residence.

Security system: At the main entrance, security building available 24/7; cameras with high definition and day/night vision on the complex’ entrance and on the walls around the complex, digital video recording devices, intercom system with a camera and connection to building entrances and to the security. 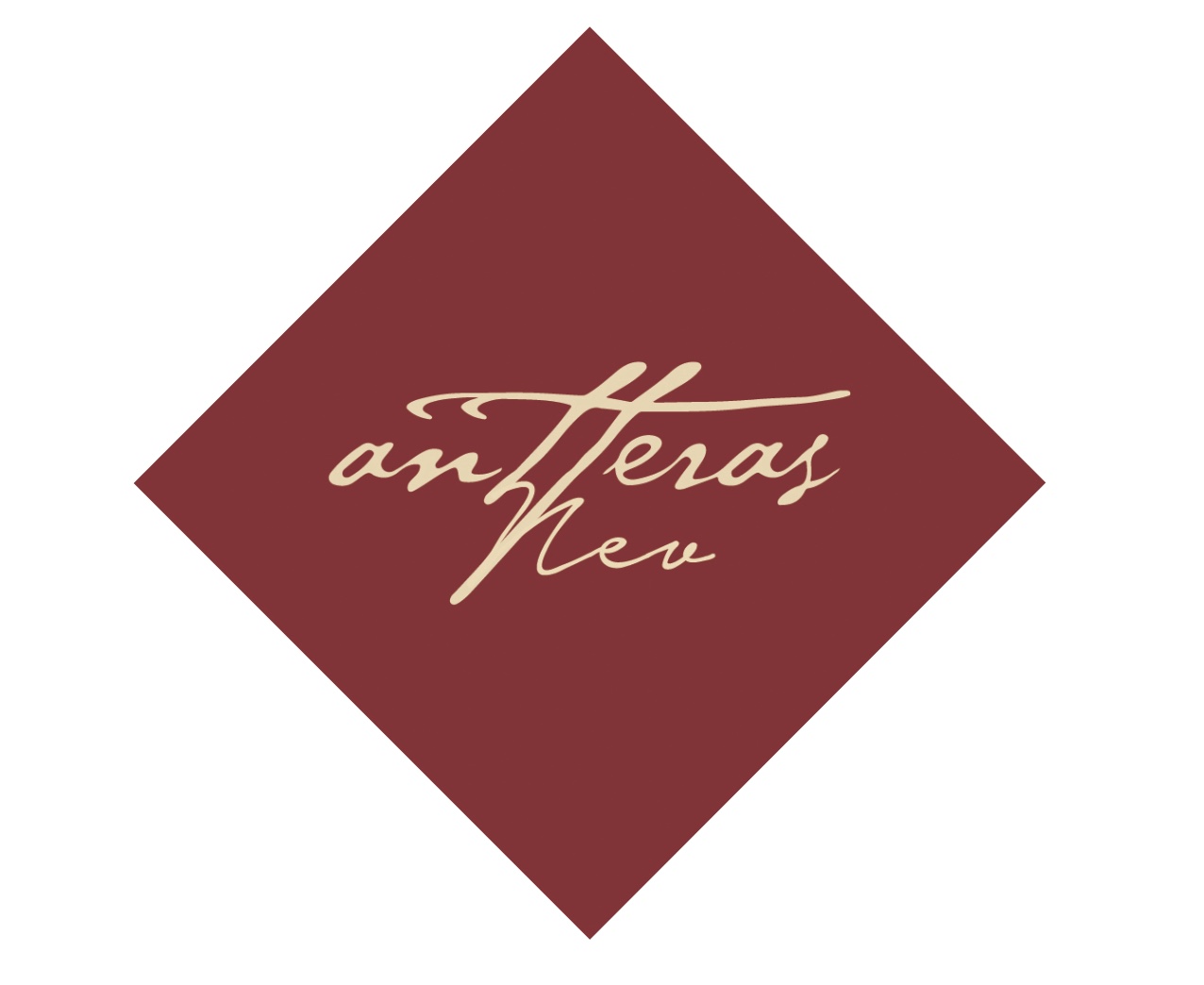 Both in the center of the city and far away from the hustle and bustle, the Antteras Nev project, where you will be at home as soon as you pass the Bosphorus Bridge, has very easy access. If you are using the first beltway, turn at the Altunizade exit, after Üsküdar continue to Beylerbeyi. After turning right at Beylerbeyi Çamlıca Street, you will reach Antteras Nev. If you’re using the TEM (E80) route, turn off at the Ümraniye exit and go along the Kısıklı Büyük Çamlıca Street. Turn left at the crossroads at the end of that street, and then onto Mehmet Akif Ersoy Street, there you will arrive at Antteras Nev.

What’s special about our project Antteras is that we designed it meticulously as an Ant Construction to have the ÇEDBIK-Konut (ÇEDBIK-Residence), it received the first Green Building certificate in Türkiye. As you know, many buildings Ant Construction have constructed and are constructing in Türkiye and around the world have the Green Certificate. The pilot project Antteras won the ÇEDBIK (Environmentally Friendly Green Buildings Association) Residence Certificate and added another important link to the chain. At Ant Construction, we have once again shown with our certificates that we are sensitive about green buildings and sustainability for the future.

HISTORICAL “THE TOWN OF THE GENTLEFOLK”, BEYLERBEYİ

When it comes to this district, the meaning of its name and its origin is always an object of curiosity. A small village during the Byzantine era, Beylerbeyi’s oldest known name is Stavros. At the time, there was a church with a golden cross on top, and it is said that this is the origin of the name.

During the Ottoman Empire, a person who was responsible for the governing of a state was called “Beylerbey”.

During the Selim II. era, the head of the Janissaries, Mehmed Pasha had a great seaside mansion built and bought vast lands in the area. When Mehmed Pasha became the “beylerbey” in 1584, and then the vizier in 1587, in the 16th century, he called this district “Beylerbeyi” after his title. In particular after the 17th century when this area became more crowded, and the residents there were the people of the palace and their men, the locals started calling Beylerbeyi “the town of the gentlefolk”. 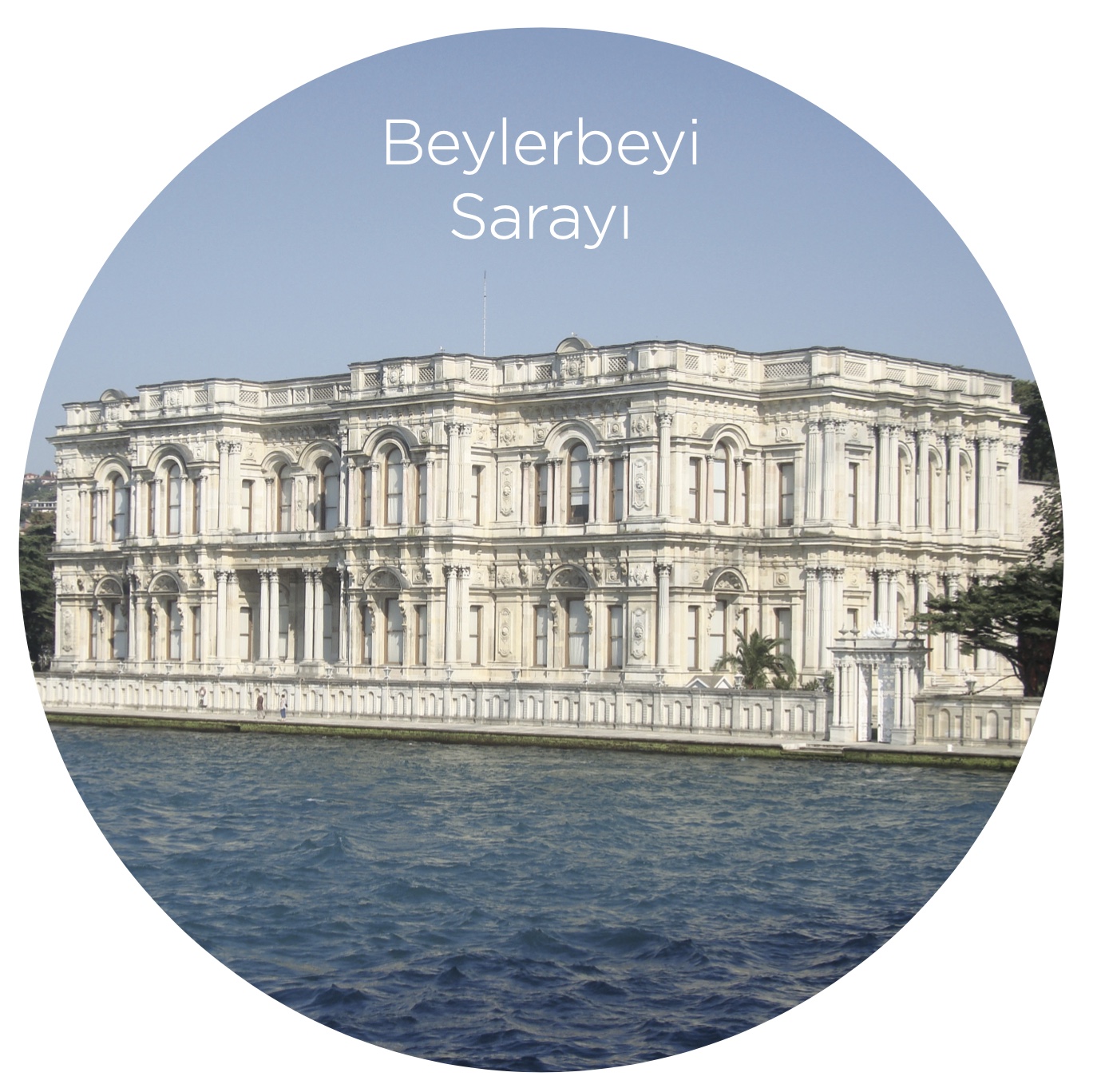 HISTORY ON ONE SIDE, FUN ON THE OTHER

You can explore and enjoy a lovely time in the souvenir shops and art galleries, visit various mussel sellers and fish restaurants with their tables dotted along the port and the road and sit in the tea gardens.

The district’s symbol is the Beylerbeyi Palace, which is right under the 15 July Martyrs Bridge. It’s one of the most spectacular palaces in Istanbul with its European baroque style architecture and Oriental feel. Also, The Historical Beylerbeyi Bathhouse within the Beylerbeyi Mosque complex is a nice place for bathhouse lovers. Many of the mansions on Yalıboyu Street in Beylerbeyi, which houses many pavilions, fountains, cisterns and troughs, were used in Yeşilçam films during the 1960s.

Speaking of palaces, Beylerbeyi Palace, which is located in one of the most beautiful places of the Bosphorus, looks dazzling with its garden and structure. Beylerbeyi Palace, which makes you feel like you’re traveling back in time, was built in 1865 during the Sultan Abdul-Aziz era. The architecture work of the palace was completed by the Balyan family, who have their name on many pieces in Istanbul. Dolmabahçe Palace, Nusratiye Mosque, Ortaköy Mosque and Selimiye Barracks are just a few to mention among their work. Since Beylerbeyi Palace was planned to be a summer house, there is no heating system inside. The building also has a room with a pool inside to cool off on summer days. This place sparkles with its hand workmanship too. You can tour the museum with a guide, but it is forbidden to take photos. 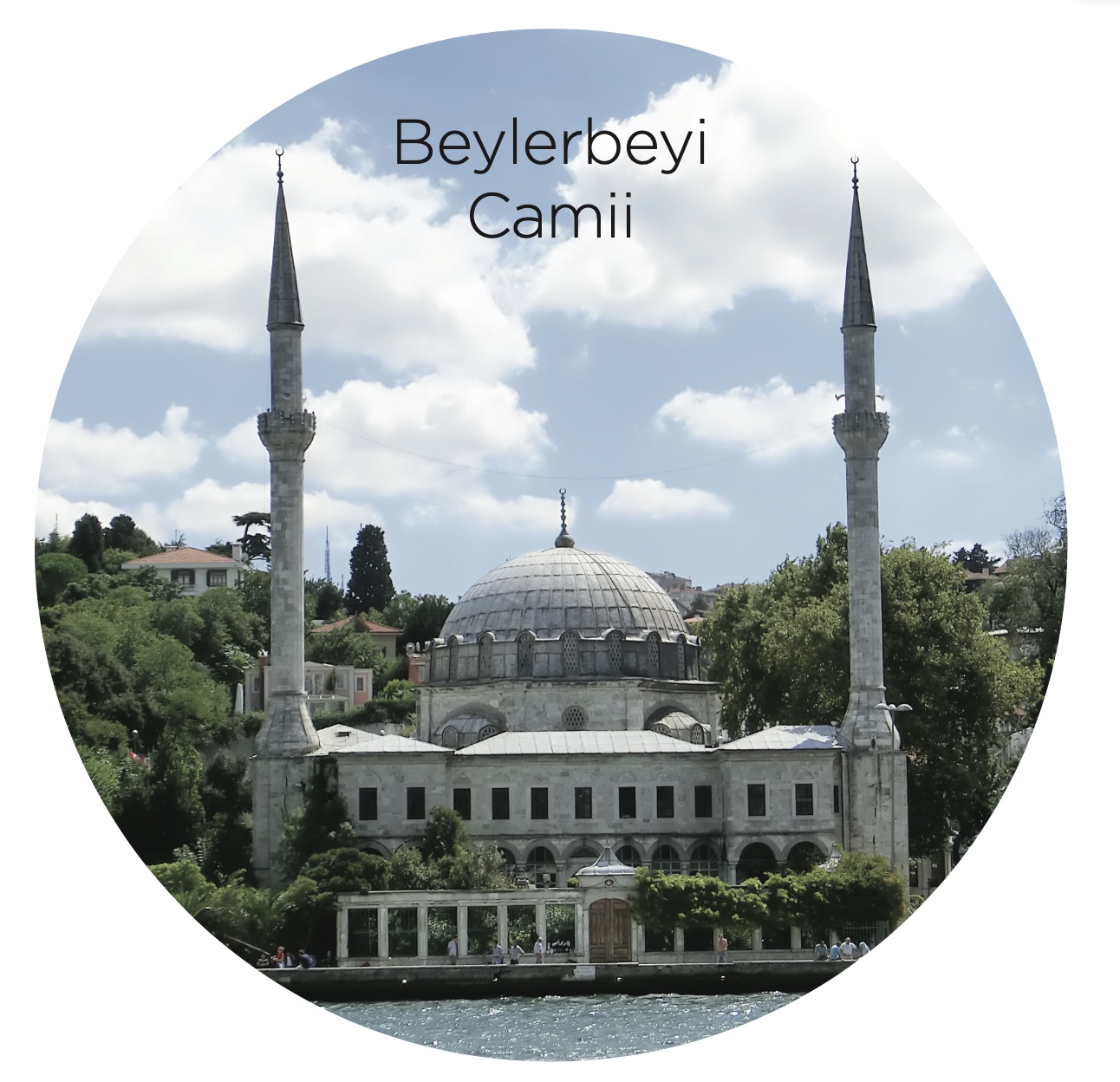 ATTRACTIONS OF THE DISTRICT

Presenting you a breathtaking view as you go down to the port, Beylerbeyi Mosque (Hamidievvel Mosque) was built in 1788 during the Abdulhamid I. era. It is also one of the most spectacular mosques of the Bosphorus.

Beylerbeyi also has the Beylerbeyi Bathhouse, built in 1789 within the mosque’s complex, where women may visit at noon time and men may visit in the morning or in the evening. This historical bathhouse has been in use without any change since the time it was built. You might encounter old water fountains on the side of the road and in restaurant gardens. Also, Beylerbeyi is one of the places where you can see old wooden houses when you explore the alleys. 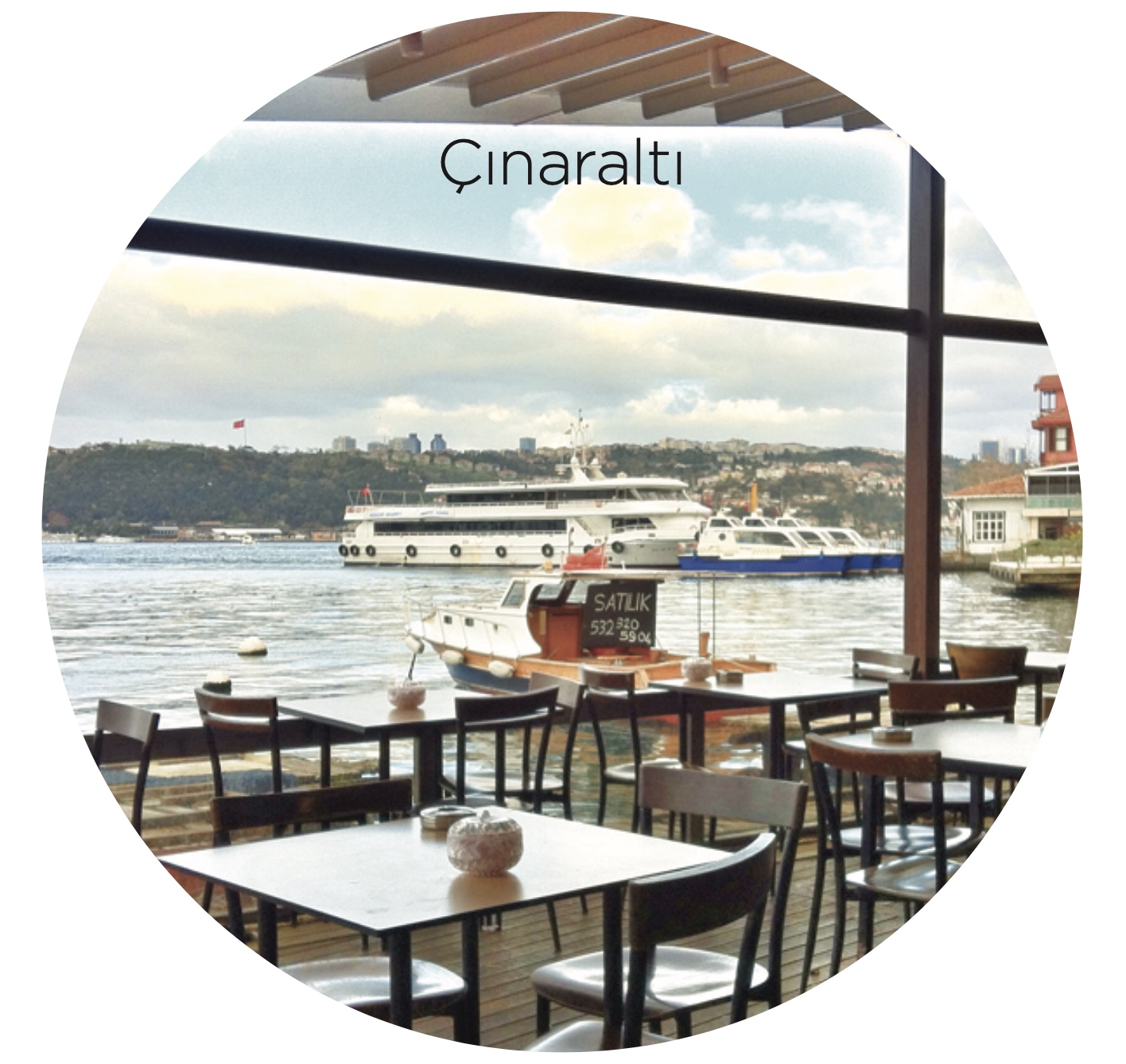 ÇINARALTI, THE PORT and RESTAURANTS

It’s still possible to run into native people who have witnessed the history here. Back then, all the people used to know each other in Beylerbeyi and take the ferries that docked at the port calmly and respectfully. Moreover, everyone used to have their own seat on the boat, and whenever someone saw a seat empty, they would be concerned, visit the absent person’s house and ask if they were okay.

Today, the most important privilege the residents of Beylerbeyi have is going down to the shore enjoying the Bosphorus view and surrounding green areas. On the shore, a lovely wooden port, plane trees and seagulls are waiting. Considered Anatolia side’s Ortaköy today, in Beylerbeyi; art galleries and stores are aligned next to each other near the ferry port.  You can spend some time at the fish restaurants and various coffee houses, enjoy a cup of coffee and a rest.