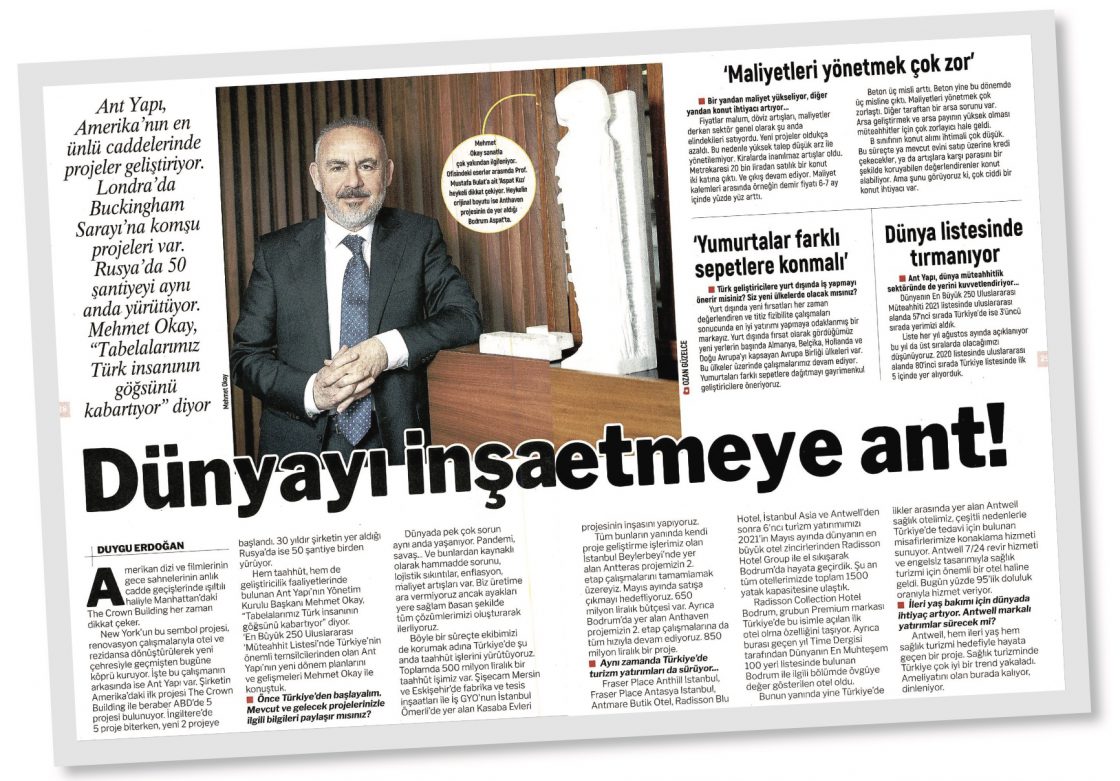 WE ARE IN THE MİLLİYET EXECUTIVE

Mehmet Okay, the Board Member of Ant Yapı has appeared as a guest on Emlak Avcısı, the TV show on A Para and in the Milliyet Executive, the monthly finance magazine of Milliyet Gazetesi. Explaining Ant Yapı’s domestic and international operations in the news article titled ‘Dünyayı inşa etmeye ant!’ /’An Oath to build the world!’, Mr. Okay says “Our billboards make Turkish people proud”.

Milliyet Executive, the monthly finance magazine of Milliyet Gazetesi, hosted Mehmet Okay, our Board Member, on its pages this month. In the news article titled ‘Dünyayı inşa etmeye ant!’ /’An Oath to build the world!’, it stated “Ant Yapı develops projects on the most famous streets in the USA, it has projects around Buckingham Palace in London and at the same time it manages 50 construction sites in Russia.” Mehmet Okay, the Chairperson of Ant Yapı, was also interviewed by Duygu Erdoğan from the Milliyet Economy Service and stated “Our billboards make Turkish people proud.” 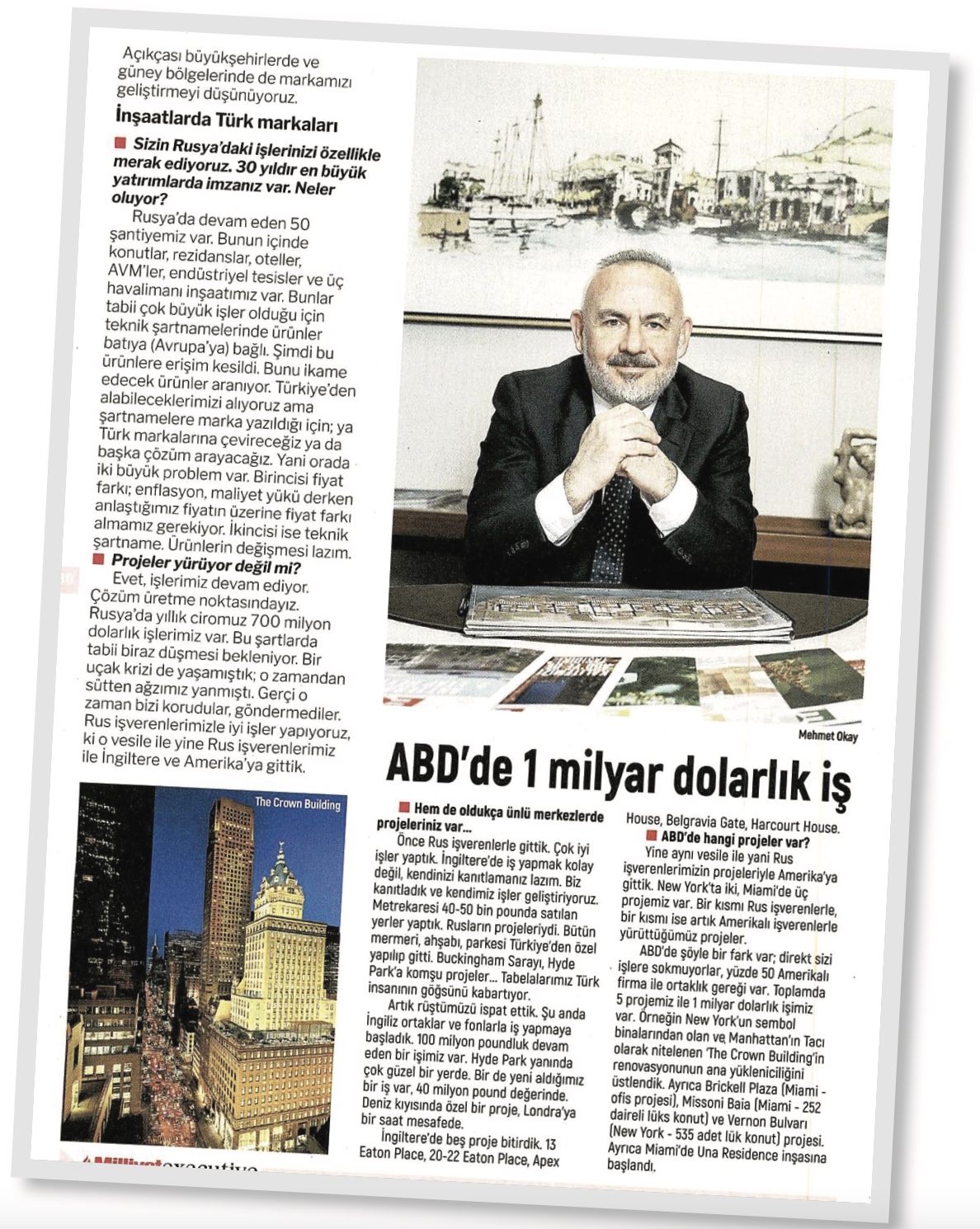 The Crown Building project in New York is also mentioned in the article:

“The Crown Building in Manhattan always attracts attention with its glittering appearance in the night scenes of American TV series and movies. The iconic renovation project of New York has been transformed into a hotel and residence, and with its new appearance, it builds a bridge from the past to the present and Ant Yapı is behind this project. The company has five projects in the USA, including this first one, The Crown Building. It has also started two new projects in England after completing five projects there. In Russia, where the company has been involved for 30 years, 50 construction sites run simultaneously. Mehmet Okay, the Chairperson of Ant Yapı, which is engaged in both contracting and development activities, says, “Our billboards make Turkish people proud.” We talked to Mehmet Okay about the new plans and developments for Ant Yapı, which is one of the most important representatives for Türkiye and listed in the “World’s Top 250 International Contractors List”.

Underlining that Ant Yapı has strengthened its position in the world contracting sector, Mehmet Okay said, “We ranked 57th internationally and third in Türkiye in the World’s Top 250 International Contractors 2021 list. The list is announced every year in August, and we think we will be at the top of the list again this year. In 2020, we ranked 80th internationally, and we were among the top five on the list in Türkiye.” 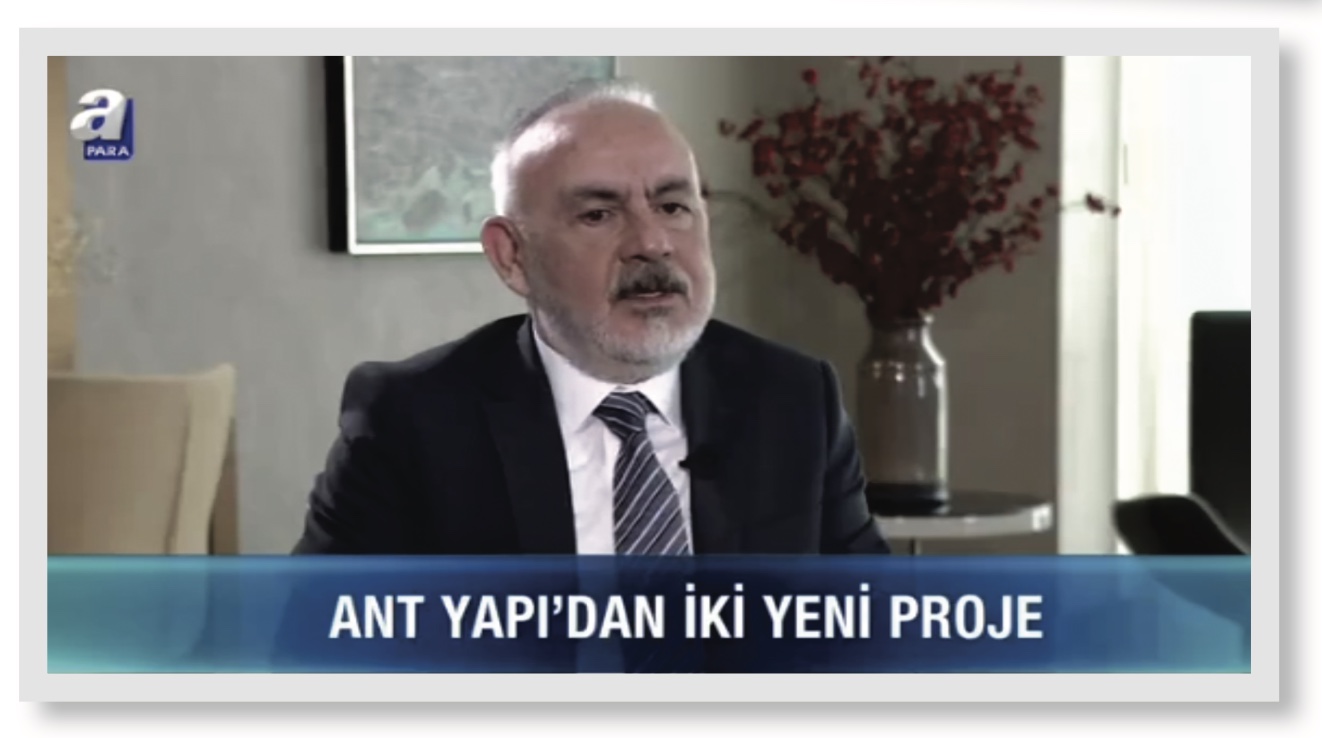 Following the projects “Fraser Place Anthill Istanbul, Fraser Place Antasya Istanbul, Antmare Boutique Hotel, Radisson Blu Hotel, İstanbul Asia, and Antwell we have completed our 6th tourism investment in Bodrum in May 2021 in cooperation with the Radisson Hotel Group, one of the largest hotel groups in the world. Currently, we have reached a total bed capacity of 1,500 in all our hotels. Radisson Collection Hotel Bodrum, the group’s Premium brand, is the first hotel opened under this name in Türkiye. In addition, this hotel was praised in the section about Bodrum, which was included in the list of 100 Most Amazing Places in the World by Time Magazine last year. In addition, Antwell health hotel, which is among the firsts in Türkiye, offers accommodation services to our guests who are in Türkiye for treatment for various reasons. Antwell has become an important hotel for health tourism with its 24/7 infirmary service and barrier-free design. Today, it has an occupancy rate of 95 percent.”

Mehmet Okay, who was the guest of the Emlak Avcısı TV program on A Para on April 11, 2022, talked to Seda Tabak about our new projects, our investments abroad and our long-term plans: “Construction is a very important sector that provides added value and it needs to continue progressing, as the interest from foreigners continues. We receive serious demands from the Middle East, Turkic Republics, Russia, and Ukraine, and we have sales.”